CAS No.: 142-71-2
The uses for copper(II) acetate are more plentiful as a catalyst or oxidizing agent in organic syntheses. For example, Cu2(OAc)4 is used to couple two terminal alkynes to make a 1,3-diyne.

The reaction proceeds via the intermediacy of copper(I) acetylides, which are then oxidized by the copper(II) acetate, releasing the acetylide radical. A related reaction involving copper acetylides is the synthesis of ynamines, terminal alkynes with amine groups using Cu2(OAc)4 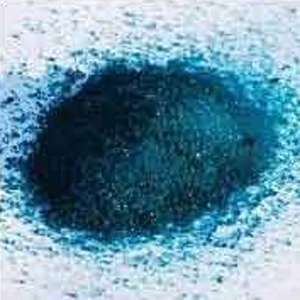 CAS No.: 7447-39-4
Copper Chloride occurs naturally as the very rare mineral tolbachite and the dihydrate eriochalcite. Both are known from fumaroles. More common are mixed oxyhydroxide-chlorides like atacamite Cu2(OH)3Cl, arising among Cu ore beds oxidation zones in arid climate (also known from some altered slags). 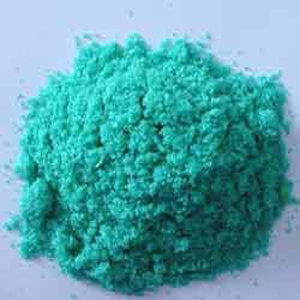 CAS No.: 7447-39-4
A major industrial application forCopper Chloride is as a co-catalyst with palladium chloride in the Wacker process. In this process,ethene (ethylene) is converted to ethanal (acetaldehyde) using water and air. During the reaction, PdCl2 is reduced to Pd, and the CuCl2serves to re-oxidize this back to PdCl2. Air can then oxidize the resultant CuCl back to CuCl2, completing the cycle 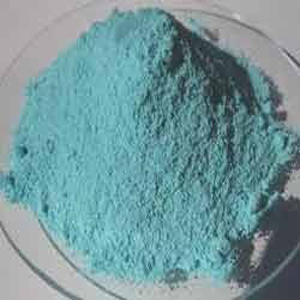 CAS No.: 1184-64-1
Copper Carbonate (often called copper carbonate or cupric carbonate) is a blue-green compound (chemical formula CuCO3) forming part of the verdigris patina that is found on weathered brass, bronze, and copper. The color can vary from bright blue to green, because there may be a mixture of both copper carbonate and basic copper carbonate in various stages of hydration. It was formerly much used as a pigment, and is still in use for artist's colors. It has also been used in some types of make-up, like lipstick, although it can also be toxic to humans. It also has been used for many years as an effective algaecide in farm ponds and in aquaculture operations. Copper carbonate was the first compound to be broken down into several, separate elements (copper, carbon, and oxygen). It was broken down in 1794 by the French chemist Joseph Louis Proust (1754–1826). When burnt, it thermally decomposes to form CO2 and CuO, a black solid. 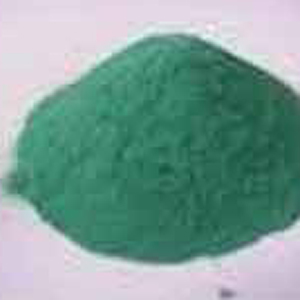 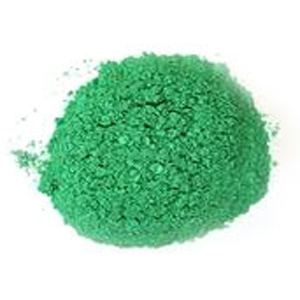 CAS No.: 20427-59-2
Copper(II) hydroxide has been used as an alternative to the Bordeaux mixture, a fungicide and nematicide.Such products include Dupont's Kocide 3000. Copper(II) hydroxide is also occasionally used as ceramic colorant. Copper(II) hydroxide has been combined with latex paint, making a product designed to control root growth in potted plants. Secondary and lateral roots thrive and expand, resulting in a dense and healthy root system. It was sold under the name Spin Out, which was first introduced by Griffin L.L.C. The rights are now owned by SePRO Corp. It is now sold as Microkote either in a solution you apply yourself, or as treated pots. 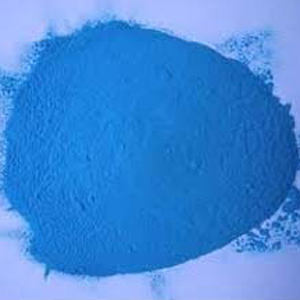 CAS No.: 3251-23-8
Copper(II) Nitrate, Cu(NO3)2, is an inorganic compound that forms a blue crystalline solid. Anhydrous copper nitrate forms deep blue-green crystals and sublimes in a vacuum at 150-200 °C. Copper nitrate also occurs as five different hydrates, the most common ones being the trihydrate and hexahydrate. These materials are more commonly encountered in commerce than in the laboratory. 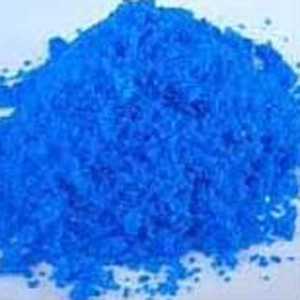 CAS No.: 1317-38-0
Copper Oxide is used as a pigment in ceramics to produce blue, red, and green (and sometimes gray, pink, or black) glazes. It is also used to produce cuprammonium hydroxide solutions, used to make rayon. It is also occasionally used as a dietary supplement in animals, against copper deficiency. Copper oxide has application as a p-type semiconductor, because it has a narrow band gap of 1.2 eV. It is an abrasive used to polish optical equipment. Cupric oxide can be used to produce dry cell batteries. It has also been used in wet cell batteries as the cathode, with lithium as an anode, and dioxalane mixed with lithium perchlorate as the electrolyte. Copper oxide can be used to produce other copper salts. It is also used when welding with copper alloys. Another use for copper oxide is as a substitute for iron oxide in thermite. This can turn the thermite from an incendiary to a low explosive. 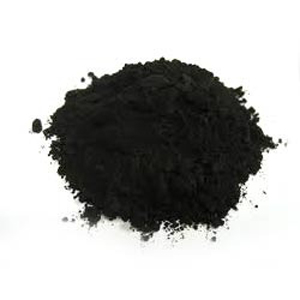 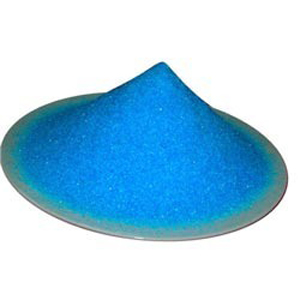 CAS No.: 7758-98-7
Copper Sulphate pentahydrate is a fungicide. However, some fungi are capable of adapting to elevated levels of copper ions. Mixed with lime it is called Bordeaux mixture and used to control fungus on grapes, melons, and other berries. Another application is Cheshunt compound, a mixture of copper sulfate and ammonium carbonate used in horticulture to prevent damping off in seedlings. Its use as a herbicide is not agricultural, but instead for control of invasive aquatic plants and the roots of plants near pipes containing water. It is used in swimming pools as an algaecide. A dilute solution of copper sulfate is used to treat aquarium fish for parasitic infections and is also used to remove snails from aquariums. Copper ions are highly toxic to fish, so care must be taken with the dosage. Most species of algae can be controlled with very low concentrations of copper sulfate. Copper sulfate inhibits growth of bacteria such as Escherichia coli. 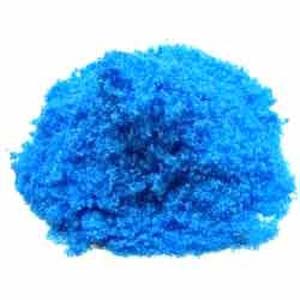